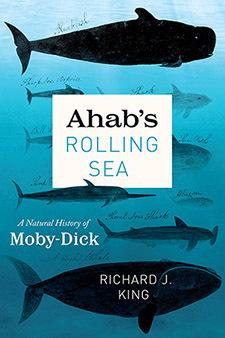 Although Herman Melville's Moby-Dick is beloved as one of the most profound and enduring works of American fiction, we rarely consider it a work of nature writing—or even a novel of the sea. Yet Pulitzer Prize–winning author Annie Dillard avers Moby-Dick is the "best book ever written about nature," and nearly the entirety of the story is set on the waves, with scarcely a whiff of land. In fact, Ishmael's sea yarn is in conversation with the nature writing of Emerson and Thoreau, and Melville himself did much more than live for a year in a cabin beside a pond. He set sail: to the far remote Pacific Ocean, spending more than three years at sea before writing his masterpiece in 1851.

A revelation for Moby-Dick devotees and neophytes alike, Ahab's Rolling Sea is a chronological journey through the natural history of Melville's novel. From white whales to whale intelligence, giant squids, barnacles, albatross, and sharks, Richard J. King examines what Melville knew from his own experiences and the sources available to a reader in the mid-1800s, exploring how and why Melville might have twisted what was known to serve his fiction. King then climbs to the crow's nest, setting Melville in the context of the American perception of the ocean in 1851—at the very start of the Industrial Revolution and just before the publication of On the Origin of Species. King compares Ahab's and Ishmael's worldviews to how we see the ocean today: an expanse still immortal and sublime, but also in crisis. And although the concept of stewardship of the sea would have been entirely foreign, if not absurd, to Melville, King argues that Melville's narrator Ishmael reveals his own tendencies toward what we would now call environmentalism.

Featuring a coffer of illustrations and an array of interviews with contemporary scientists, fishers, and whale watch operators, Ahab's Rolling Sea offers new insight not only into a cherished masterwork and its author but also into our evolving relationship with the briny deep—from whale hunters to climate refugees.

To read praise and reviews click on the blue book title above. 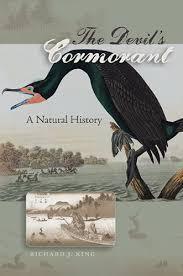 Behold the cormorant: silent, still, cruciform, and brooding; flashing, soaring, quick as a snake. Evolution has crafted the only creature on Earth that can migrate the length of a continent, dive and hunt deep underwater, perch comfortably on a branch or a wire, walk on land, climb up cliff faces, feed on thousands of different species, and live beside both fresh and salt water in a vast global range of temperatures and altitudes, often in close proximity to man. Long a symbol of gluttony, greed, bad luck, and evil, the cormorant has led a troubled existence in human history, myth, and literature. The birds have been prized as a source of mineral wealth in Peru, hunted to extinction in the Arctic, trained by the Japanese to catch fish, demonized by Milton in Paradise Lost, and reviled, despised, and exterminated by sport and commercial fishermen from Israel to Indianapolis, Toronto to Tierra del Fuego. In The Devil’s Cormorant, Richard King takes us back in time and around the world to show us the history, nature, ecology, and economy of the world’s most misunderstood waterfowl. 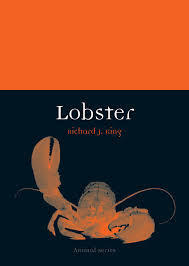 Part of the Animal series, King’s Lobster takes us on a journey through the history, biology, and culture of lobsters, including the creature’s economic and environmental status worldwide. He describes the evolution of technologies to capture these creatures and addresses the ethics of boiling them alive. Along the way, King--who has worked as both a lobsterman and a fishmonger--also explores the salacious lobster palaces of the 1920s, the animal’s thousand-year status as an aphrodisiac, and how the lobster has inspired numerous artists, writers, and thinkers including Aristotle, Dickens, Thoreau, Dalí, and Woody Allen. 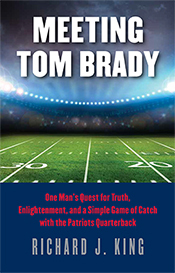 Imagine that you are an average American man. You work hard and love football. Your present is a highway of unbounded opportunity, your future a far horizon unclouded by doubt. Then comes middle age. Who can you look to when the highway begins to crack, when opportunity shrinks to the size of a cubicle, and the horizon looms close? For Richard J. King, the answer is clear: Tom Brady. The legendary quarterback of the New England Patriots is not just a four-time Super Bowl champion, three-time MVP, and certain Hall of Famer. He is a male epitome. Gifted but humble. Driven but balanced. Aging but youthful. Devoted to both career and family. At the pinnacle of success but somehow still one of us. If anyone can point the way to living a worthy life, Tom Brady can. And so, at the start of the 2013 football season, King sets off in an ’88 Volkswagen minibus in a time-honored quest to answer life’s pressing questions—and to meet his hero. From training camp to the playoffs, from Spy-gate to Deflate-gate, King takes us on a tour of stadiums and bars across the country. Along the way he talks with players, sportswriters, and Patriots management, and poses the existential question, “What would you ask Tom Brady?” Meeting Tom Brady is funny and wise, a memoir of an eventful season in both King’s life and Brady’s—a determined pursuit, with uncertain results.

Women and the Sea and Ruth! 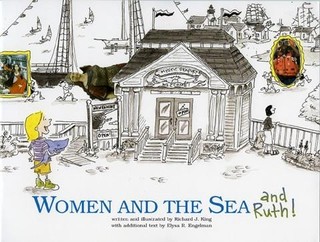 Ruth, with her stuffed shark, explores a museum exhibit about women and the sea. She goes from painting to photographs learning about the different roles women have had with the ocean.

Advocates for published authors since 1912