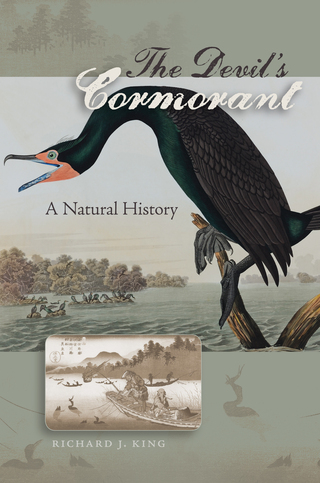 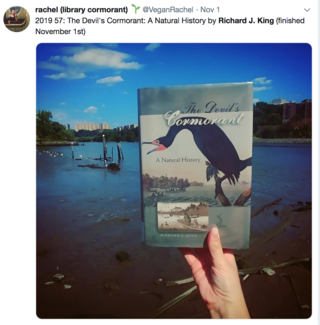 Behold the cormorant: silent, still, cruciform, and brooding; flashing, soaring, quick as a snake. Evolution has crafted the only creature on Earth that can migrate the length of a continent, dive and hunt deep underwater, perch comfortably on a branch or a wire, walk on land, climb up cliff faces, feed on thousands of different species, and live beside both fresh and salt water in a vast global range of temperatures and altitudes, often in close proximity to man. Long a symbol of gluttony, greed, bad luck, and evil, the cormorant has led a troubled existence in human history, myth, and literature. The birds have been prized as a source of mineral wealth in Peru, hunted to extinction in the Arctic, trained by the Japanese to catch fish, demonized by Milton in Paradise Lost, and reviled, despised, and exterminated by sport and commercial fishermen from Israel to Indianapolis, Toronto to Tierra del Fuego. In The Devil’s Cormorant, Richard King takes us back in time and around the world to show us the history, nature, ecology, and economy of the world’s most misunderstood waterfowl.

Praise for The Devil's Cormorant

"Richard King has a rare knack for seeing the large in the little, showing how a rather obscure bird or a humble shellfish actually looms large in the lives of men and women. He writes comfortably, with all the authority but absolutely none of the pretense of a leading scientific expert (though he is). He invites you, then lets you see. The Devil’s Cormorant is about a misunderstood bird whose value has been appreciated by few, intentionally ignored by some, and overlooked by most. This book is his gift to us."—Carl Safina, author of Song for the Blue Ocean and The View From Lazy Point.

"Richard King’s The Devil’s Cormorant explores the complex, centuries-long relationship between humans and cormorants. What is it about these bizarre, prehistoric-looking birds that evokes such powerful feelings of hatred—and love? Viewed as trash birds in need of extermination by many people and sacred partners in the hunt by others, cormorants have rarely been looked at in an appreciative way, as one of the most fascinating groups of birds in the world. King puts a face on the cormorants as well as on the people who love them and those who would exterminate them. I felt at best ambivalent about cormorants before reading this book; I’ll never view these birds the same again." — Tim Gallagher, author of The Grail Bird and editor-in-chief of Living Bird magazine.

"This book is delicious! I had no idea cormorants had so many interesting stories, and many of them in their interrelationship with humans. It’s a fun read, informative, and eye-opening. I highly recommend it." — Bernd Heinrich, author of Life Everlasting: The Animal Way of Death and Ravens in Winter

"Before I read this marvelous, idiosyncratic book, I might have said I wasn't interested in cormorants. Now—I'll never not be interested. Richard King's account of one specific creature is on the outside modest, relaxed, and unpretentious, a pleasure to read—but beneath that, ambitious, intellectually challenging, and moving. As with the work of David Quammen it forces us to question how we view the natural world, how we intervene in it, and how we control the consequences." — Andrea Barrett, author of Voyage of the Narwhal and Ship Fever

"The Devil’s Cormorant twists and turns through history, natural history and culture, continually serving up the unexpected. This is a fascinating tour through time and around the world that highlights our enduring, varied and often fraught connections to nature." — Callum Roberts, author of The Unnatural History of the Sea and The Ocean of Life: The Fate of Man and the Sea

"Innovative and stimulating with a potentially wide audience, this book is the first of its kind in this area. It will be a seminal and benchmark work." — Timothée Cook, PhD, Percy Fitzpatrick Institute, University of Cape Town

Reviews for The Devil's Cormorant

"King avoids the navel-gazing that unfortunately plagues much environmental creative nonfiction. Like John McPhee, he keeps his focus outward, specifically on the cormorant. No pedant, he succeeds at educating me while holding my attention through his supple prose and deep sympathy." --Comments for the ASLE Creative Book Award ShortList

"King demonstrates his multidimensional expertise on matters relating to the sea in this excellent exploration of the world of cormorants...thorough and authoritative as well as charming. --Library Journal

"King’s book is not only for those with a particular interest in the cormorant (for indeed, sales would be small in that case). What makes the book fascinating is that it examines the way one bird is woven so inextricably into mythology, biology, fisheries, and the common consciousness. In that respect, Cormorant is less about a species of bird than about a phenomenon, making it a fascinating read." --41˚N (magazine of RI Sea Grant/URI Coastal Institute)

"This diverse book holds a reader's attention and delivers much more than is suggested by the title. Every reader will find new light shed on the relationships between cormorants and people." --Jeremy J. Hatch, Waterbirds

"Despite the subtitle, this is a work as much about human history and values, as it is about nature...King sees past the symbol and presents the real cormorant, living amidst real people. And one is left with this conclusion: Surely we need animals as symbols. But let's not allow it to obscure the real, complicated, beautiful creatures among us." --Matt Miller, The Nature Conservancy

"King writes well, stitching together scientific "facts," general interpretations thereof, peoples' and institutions' stories and histories, and vignettes of the natural world...very much like the maritime studies programme itself [where he teaches], this book is clearly an interdisciplinary endeavour...many a page of King's entertaining and thought-provoking book details how humans have dramatically altered habitats, affected ecosystems, eradicated or overharvested whole populations right across the globe. These details suggest strongly that the real Devil in all this is very probably not an avian one at all." --Dave Carss, Seabird

"In fact, this is one of the best natural (and cultural) history books that I have read in quite some time." --Maine Birding Field Notes

"King teases out this relationship from multiple perspectives--literary, historical, artistic, ornithological, political--in a book that is informative, personable, and fascinating." --Birding (ABA)

"At one point, King states, 'I'm not a biologist,' yet his passages on cormorant taxonomy, physiology, and behavior are clear, accessible, and informative. This is the best kind of natural history, encompassing scientific, ecological, cultural, literary, and artistic dimensions of the human perception of, and interaction with, cormorants...The Devil's Cormorant will appeal to a broad audience, in fact, to all those interested in life itself on earth and the interaction of species on it." --The Nautilus

"King provides descriptions of cormorant taxonomy and life history detailed enough for the biologist to appreciate and easy enough for the layman to understand. The author patches these bits of fact with stories from his own journeys to many of the book's places as well as to the cormorant colony near his home in Connecticut...This is a great read for any seabird biologist. With cormorant population issues now at the forefront in many parts of North America and Europe, The Devil's Cormorant is recommended to anyone with an interest in these underappreciated birds and certainly for anyone involved in the mess of what is now called cormorant management." --Marine Ornithology

“The Devil’s Cormorant is a spellbinding cultural blend of literature, art, history, science and cormorant management policies by a self-confessed non-biologist with a day job as a literature professor…This is an authoritative account...It is an absorbing read.”
--Ibis (International Journal of Avian Science)