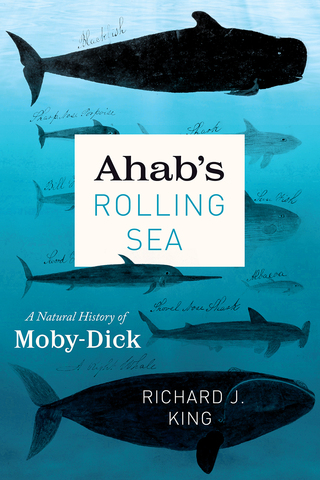 Although Herman Melville's Moby-Dick is beloved as one of the most profound and enduring works of American fiction, we rarely consider it a work of nature writing—or even a novel of the sea. Yet Pulitzer Prize–winning author Annie Dillard avers Moby-Dick is the "best book ever written about nature," and nearly the entirety of the story is set on the waves, with scarcely a whiff of land. In fact, Ishmael's sea yarn is in conversation with the nature writing of Emerson and Thoreau, and Melville himself did much more than live for a year in a cabin beside a pond. He set sail: to the far remote Pacific Ocean, spending more than three years at sea before writing his masterpiece in 1851.

A revelation for Moby-Dick devotees and neophytes alike, Ahab's Rolling Sea is a chronological journey through the natural history of Melville's novel. From white whales to whale intelligence, giant squids, barnacles, albatross, and sharks, Richard J. King examines what Melville knew from his own experiences and the sources available to a reader in the mid-1800s, exploring how and why Melville might have twisted what was known to serve his fiction. King then climbs to the crow's nest, setting Melville in the context of the American perception of the ocean in 1851—at the very start of the Industrial Revolution and just before the publication of On the Origin of Species. King compares Ahab's and Ishmael's worldviews to how we see the ocean today: an expanse still immortal and sublime, but also in crisis. And although the concept of stewardship of the sea would have been entirely foreign, if not absurd, to Melville, King argues that Melville's narrator Ishmael reveals his own tendencies toward what we would now call environmentalism.

Featuring a coffer of illustrations and an array of interviews with contemporary scientists, fishers, and whale watch operators, Ahab's Rolling Sea offers new insight not only into a cherished masterwork and its author but also into our evolving relationship with the briny deep—from whale hunters to climate refugees.

For further contents and ordering see University of Chicago Press

"If you love Moby-Dick, you should read this book."

--Nathaniel Philbrick, author of In the Heart of the Sea and Why Read Moby-Dick?

"It took me decades to appreciate that Melville's messy, uncontainable, surging Moby-Dick is perhaps the greatest book ever written about the sea, and about the human relationship with the living world, and perhaps the only book sufficiently un-jaded by mercantilism and modernity to be worthy of the actual ocean itself in all its raw, uncontrollable, surging majesty. But if you don't want to wait decades for the Melville's magnificence to be revealed, you can cheat and read Richard King's book. Ahab's Rolling Sea is a marvelous guide to the magic and mystery that was Melville's gift to us, for King reveals the deep, deep back-story of the making of Moby-Dick, the vast pots of experience and information that Melville simmered down, and even the missing ingredients of his age, that made Moby-Dick the richest bouillabaisse in all of literature. Oh, and about Melville's missing ingredients—they're here, in King's terrific book."

--Carl Safina, author of Beyond Words: What Animals Think and Feel and Song for the Blue Ocean

"Ahab's Rolling Sea is a wide-ranging, highly personal, richly eclectic, and extremely well-researched book whose style and humor, combined with its rigor, suggest the potential for popularity even beyond the fascinations of this self-confessed whalehead. Who could not warm to a chapter titled 'Gulls, Sea-Ravens, and Albatrosses' or 'Sword-Fish and Lively Grounds,' or be intrigued by 'Phosphorescence'? There's a Melvillean romance here, and it sits especially well with King's love and empathy for human as well as natural history. A contemporary, witty, almost postmodern field guide."

--Philip Hoare, author of RISINGTIDEFALLINGSTAR, The Sea Inside, and The Whale

"King decisively settles any lingering questions about Moby-Dick, nineteenth-century whales and whaling, and all lore and literature of the sea. More than establishing a factual basis for Ishmael's fiction-making, King writes passionately on climate change, economic pressures on sea creatures, and the future Melville confronts in his marvelous encounter with the 'wonder-world' of whaling. King's deep knowledge grounds lively storytelling, keen observations drawn from years of sailing, and an eye for details that will make Melville's book come alive. But even if you haven't read Moby-Dick, you will revel in this storehouse of fascinating tales and arcana, from Ambergris to Zeuglodon. A treasure for library, classroom, or bedside table."

"This is a superb work of popular scholarship that rivals the best books of maritime nonfiction currently in print. For any teacher, reader, or aficionado of Melville's magnum opus the present work will be a joy to read; for anyone curious about the current state of the marine environment, this book will be eye-opening."

"With Ahab's Rolling Sea, historian Richard J. King uses modern sources and historical texts to take a fresh look at Melville's book—published in the same decade as Charles Darwin's On the Origin of Species—with the well-defined brief of assessing its natural history content. The result is a light-hearted and incredibly enjoyable read that manages somehow, at the right moments, to be both broad and narrow in scope. It should be required reading for anyone attempting Moby-Dick...He is too talented and clear-eyed a writer to confine himself to literary criticism."

"The science in Ahab's Rolling Sea includes a lively review of Melville's research. One wonderful aspect of the book is its illustrations, both 19th-century engravings familiar to Melville and contemporary graphics that bring the information up to date...Ultimately, answering these questions involves poetry more than science. Melville has combined the rational, objective, Darwinian perspective with the emotional, poetic, Emersonian perspective, pushing the reader to see nature as both dangerous and damaged. Here is King's main point: that Melville's novel can now be read as an introduction to environmental issues of the 21st century."

"Herman Melville's sprawling masterpiece Moby-Dick (1851) is a fictional feat studded with empirical evidence, reveals maritime historian Richard King in this invigorating study. King traces references to ethology, meteorology, marine microbiota and the oceans to Melville's sailing experience in the Pacific and wranglings with the works of scientists William Scoresby, Louis Agassiz and others. Moby-Dick, King boldly avers, is a 'proto-Darwinian fable' — and its beleaguered narrator, Ishmael, an early environmentalist."

"Since most Melville criticism occurs safely in drydock, his ocean life has long deserved a responsible re-examination. Richard J. King gives us natural history done Melville-style, looking over a ship's rail, and this ingenious focus neatly weds field science and literary history, yielding a study that is fresh, provocative, and welcome...King navigates it with genuine expertise, deftly balancing fact and feeling, even as his forays into Melville's blue-water world mostly show us how to say good-bye."

"[King] balances dissection and poetry remarkably well, reminding us that Ishmael insists on regarding the whale as a text, birthed in folio, octavo, demi, a gnarled surface on which the tale of human aspiration might be inscribed. In the same way, a rather schematic structure – Ahab's Rolling Sea could be used as a reference book, a zoological concordance to Moby-Dick – is combined with a genuinely gripping retelling of the tale...King warns against any casual assumption that Melville was motivated by conservation. That would be anachronistic. Melville may have written his book by the light of a whale-oil lamp or glanced by day at passing women with embonpoints supported by baleen. He knew there was a continuity at work: a hierarchical chain up from the smallest animalcules to the present work of man, building empire and conquering nature."

"This examination of Moby-Dick as nature writing could be a sneaky way to get the English majors on your shopping list to read about science. In Ahab's Rolling Sea, Richard J. King uses Herman Melville's Moby-Dick to gauge American knowledge and views of the ocean and its inhabitants in the mid-19th century and to consider how those views have changed over the intervening 170 or so years. King follows the voyage of the Pequod, exploring topics in marine biology, oceanography, and navigation as Ishmael (Melville's narrator) takes them up; these topics range from whale migration, physiology, intelligence, and behavior (including aggression) to phosphorescence, sharks, coral insects, typhoons, and St. Elmo's Fire."

"To 'Moby Dickheads', Ahab's Rolling Sea is a treasure trove. King situates Melville as a person of his time, writing amid a quickening pace of discoveries about the natural world but, pre-On the Origin of Species, inclined to couch them as further disclosures of God's design."

"I'm an easy mark for books like Ahab's Rolling Sea: A Natural History of Moby-Dick, which I've read a perhaps unhealthy number of times, in light of Annie Dillard's opinion that Melville's baggy masterpiece is the "best book ever written about nature." Focusing on 19th-century oceanography, natural history, and, of course, the whalers' understanding of his prey's remarkable intelligence, King's book is a fascinating and rare thing: a vital addition to Melville studies."

--Stephen Sparks, Lit Hub, "12 Books You Should Read this October"

"[Ahab's Rolling Sea] results in some rare gems, from the biological to the linguistic...Ahab's Rolling Sea will give you a new appreciation of the sperm whale. If you are studying Melville's book, it will provide you details far more original than any exam guide. It also underscores the more undesirable aspects of another animal that stars in Moby-Dick: humans,with our penchant for environmental destruction."

"Ishmael's view of sperm whales and oceans is laced with literary flourishes but immersed in the science and natural history of the day. King reflects on what we have learned and lost from the oceans since Melville's time. He answers questions many readers surely ponder, including whether a 19th-century sailing ship could have tracked a single whale across an entire ocean. Naturally, the book is full of spoilers. Read Moby-Dick, read this, then read Moby-Dick again."